Phasic will be playing live at 2 events in May
The first event is My Sakes at Djangos Riff, Wood St., Liverpool on Thursady 7th June. For more information, click here.
The second event is at the close of the Moves '07 festival, in Manchester, where Hippocamp are taking over the Contact Theatre in Manchester on Saturday 16th June. For more details, see here.
February 20 2007

Phasic's debut album 'Many Simple Systems' is now out of stock on CD, but due to demand, it is now available via digital download at IndieStore.

The album can be downloaded as a bundle, or individual tracks can be purchased separately.

Click the image below to preview and buy the album.

Phasic will be playing live at the 2nd STFU event in Manchester, this time as part of the Futuresonic 06 festival.
venue : Common, 3pm - 8pm, free entry.
Sorry for the short notice, but this has only just been confirmed.
July 12 2006

a new Phasic release - Afterglow Remixes EP - is available as a free download at Hippocamp.net.

After a short break, Phasic is back with a new track.
The new release at Hippocamp.net is a compilation of tracks by various artists, including Phasic, which are all based around the same set of samples.
This free MP3 release is available for download here

There will be another new Phasic EP out soon, so watch this space...
February 11 2006

Phasic will be playing a downtempo live set at the Mellowtronica night, on thurdsay 16th February at the View Two gallery, Mathew Street, Liverpool. For more details, and to see the full line up, click on the e-flyer below.

Most Significant Byte is a charity event being held at The Southern, Chorlton, Manchester, next Saturday. There is a stunning line-up for this event, with DJs, VJs, and live electronics. Click the flyer below for more details.
December 14 2005 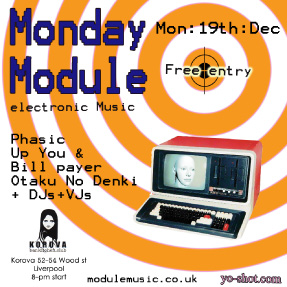 On 19/12/05, head over to Korova Bar, on Wood St., Liverpool to see Phasic VJing and performing live.


The STFU site is now live.

Following the excellent STFU '05 in Manchester, and with the next STFU coming up in Glasgow, the STFU website is now live at www.stfumusic.org.
Check here for details of an STFU event coming to an area near you.

The first at the Module night in Liverpool, is at Las Vegas (near Lime Street station), on Wed. 19th October. The second is part the second STFU event, this time in Glasgow. Phasic will be performing & VJing on day 2 (Sat. 12th November) of this 3 day event. Finally, Phasic will be performing & VJing at Most Significant Byte in Chorlton, Manchester (Sat. 14th January 2006).
All proceeds from this event will be donated to Medicins Sans Frontiers. Click on the Flyers below for more details.


a new Podcast is in the Music section :

HippoCast 1 - A selection of quality tracks from the Hippocamp net label.


Phasic Podcasts are now available in the Music section.
July 18 2005 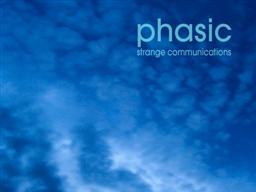 This 4 tracks EP can be downloaded for free at hippocamp.net 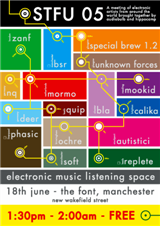 Phasic will be playing live and VJing at STFU05, on 18th June.
STFU05 is a day long gathering of European electronic artists at The Font, New Wakefield St. Manchester (2pm-2am).
The lineup is :


for more info check out the web flyer


Lithuanian based radio station Mishkas has an mp3 mix available containing 3 Phasic tracks.
The set can be streamed direct from the Mishkas site, or downloaded here


The BBC Radio 1 featured track 'Untitled15' is no longer available on the BBC website.
The track can now be downloaded here


On Saturday 30th of April Phasic will be DJing and playing live at Boodha@Cali (The Caledonia), Catherine St, Liverpool, alongside ArD and Sanagi. The night runs from 7 to 11pm.


Phasic will be playing live at Liverpool's new electronica night 'The Monday Module', at The Magnet, Monday 4th April.
For more details, see the flyer


The unreleased Phasic track 'Untitled15' was played on the BBC Radio 1 OneMusic show by Rob Da Bank.
The track is also available for download from the OneMusic website
Click here to hear a short clip from the show.


The SWALK event was excellent, and raised over £4000 for Unicef. The Hive collective ran the PA in the bar with live sets from Phasic, Zoda, and Global Goon.


The links to Phasic's live set have changed due to a revamp taking place on Hippcamp.net.
The set can now be downloaded at Scene.org.

2 Phasic tracks released on the Hippocamp 100 compilation can also be downloaded here and here.


Phasic will be playing with the Hive Collective at a charity gig in Liverpool, Sunday 13 February. See here for more details.

Phasic will be playing live at HCGreen on December 1st 2004.
HCGreen will be at the Green Room, Whitworth St West, Manchester (opposite the Ritz).
See Hippocamp.net for more details.


2 reviews of 'Many Simple Systems' are now online at Angryape.com, and electronicmusicworld


The 'Many Simple Systems' Album is now available to buy.
Click here to preview the tracks and buy the CD.


The 'Many Simple Systems' Album is now being pressed, and will be available to buy from Monday 11th October.
September 07 2004


The entire live set from Hive has now been released online at  Hippocamp (release HC067).
Preview and download here.


The gig at  Hive went pretty smoothly, and it seemed to go down well. Recordings of the set will be uploaded  soon, as well as some pictures.
The set was perfomed using custom MIDI controlled software (see screenshot).
The other acts on the night were excellent, culminating in an excellent set by Portable ( sudelectronic.com / background-records.de ).
April 21 2004


Quite a busy month! Phasic has been booked for a live set at Hive (FACT Centre, Liverpool - see links) at the end of May, and is also going to have a review and a track on the cover CD of Future Music magazine in the same month.
March 12, 2004